There are secret teachers at CBC. They flit in and out for maybe one or two classes and are only known by the students who dare to take them.

Their official titles are adjuncts. They are teachers by day but professionals by night. Or, in Wesley Brown’s case, a full-time reporter for Arkansas Business and Politics and for Tim Brewer, a pastor at Mt. Olive Baptist Church in Guy, Arkansas.

“I graduated here in 1993,” says Brewer. “When I was provided the opportunity to teach a class in 2005 I wanted to invest back into the school that invested in me.”

Brewer says his favorite classes to teach are philosophy, apologetics and Romans. He says he likes to challenge his students to think and to understand that God has a purpose in their life and they can bring God glory.

Senior Colter Hall is currently in Brewer’s 1 Corinthians class and says that he has purposefully selected Brewer for both his Old and New Testament classes.

“He does a good presentation of the word [and] I select him whenever I take my classes,” says Hall. “He doesn’t get hung up on things that don’t matter. He is repetitive and he is gonna make you remember things better.”

Similarly, junior Haley Lingenfelter says Brown is one of her favorite teachers and has taken every class that he has taught so far at CBC: Social Media, Multimedia Production and Convergence Reporting.

“I feel like I learn so much in his classes and they are interesting,” says Lingenfelter. “He is very professional [yet] humble. He is one of those who wants us to learn by doing so we get a lot of hands-on assignments so we get a feel of what he is trying to teach us.”

Brown has been a reporter since he was 16 and is now one of three reporters in Arkansas who has access to Governor Hutchinson and the state legislature. He says a prayer is what lead him here to teach at CBC and that he is blessed to be able to be in a position to impact lives and to have his own life impacted.

“The whole Christian ministry here is beautiful and I’m glad God brought me to it,” says Brown. “Coming here and meeting so many great young people who are looking ahead in life and to see their enthusiasm and joy [makes me] excited. You can see Christ’s hope here [and] sometimes when I walk into the state capital I don’t see that.”

Brown says that news reporting is his lifeblood and one of the things that God gifted him to do. But before a student masters the art of reporting, Brown says it is crucial for a student to seek Christ first.

“Seek Christ in your own way [because] God has a path of righteousness for all of us,” says Brown. “That’s the adventure of life, waking up every morning and seeing where Christ has taken us.”

Graphic made in Adobe Spark by Jessica Sawyer 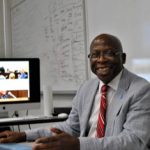 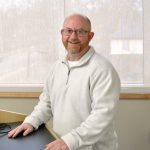 Faculty’s take on the switch to online classes