Ever wondered who those students were running around in those bright neon colored T-shirts on move-in day? The students who greeted every freshman with a smile, trying to make them feel welcomed? Those students you met were on SOS.

Senior Brianna Nunn is a transfer student from Texas and was a member of SOS this year.

“I applied to be on SOS because…I kind of did regret when I got here not being involved. When I came here, I was a transfer student. People were considering me a freshman and they would tell me your first year of college is going to be rough and I knew all of that,” says Nunn.

Another reason why Nunn applied for SOS was because she wanted to make not only the freshman but the transfer students feel welcomed.

“Not being able to know each other is hard, being eight hours away is hard. I had a very rough time coming here being away from people, but I wanted to make the transfer students feel welcome as well. I didn’t want them to feel left out just because they didn’t know anybody and that there was other people like them,” says Nunn.

Nunn has some advice for students who are thinking of applying for SOS.

“Please do it! It doesn’t matter what kind of friend group you’re in, or what situation you’re in, those people genuinely care about you and they really want to be with you all of the time,” says Nunn.

Junior Destinee Marvel applied to be on SOS to help the incoming students adjust to college life.

“I applied to be on SOS because I wanted to help incoming commuters and transfers with their first year of CBC,” says Marvel.

One of the things that Marvel enjoyed about being on SOS was meeting new people and getting to know her fellow classmates a little bit better.

“My favorite part of being on SOS was getting to make connections with new people and I learned about my fellow peers,” says Marvel. “Working with others on the common goal to make the new students feel welcome really allowed me to connect on a new level with my friends.”

Junior Jessica Borden, a returning SOS member, applied because she had a great experience when she started at CBC her freshman year.

“I applied my first year because the people on SOS made me feel so welcomed and were what made CBC begin to feel like a second home,” says Borden. “I wanted to be able to help others just like they helped me.”

Borden says her favorite part about being on SOS is getting to share God’s love with the students.

“We help others all day every day and befriend the new students, some of which may never have known God’s love for them,” says Borden.

Borden encourages those who are thinking about applying for SOS next year to apply.

“Definitely put that application in! You will be so glad you did!” says Borden.

In addition to SOS members, Dickson Hall resident assistants said they have been waiting anxiously to meet the students that will be living on their hall. 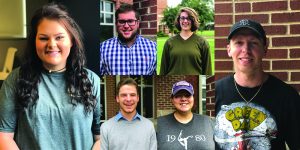 Returning third floor men’s RA is junior Luke Smith. He applied to be an RA because of how influential his own RA was.

“I applied to be an RA because of how my RA impacted me and the role of an RA is important if your living on campus [because] you need people that are there for you, so that’s what I want to be for the students on my floor,” says Smith.

Although Smith is very passionate about his role as an RA, there are some tough decisions he says he has to make.

Smith says he looks forward to getting to know the students that will be living on his hall this year and becoming closer.

“The thing I always look most forward to as an RA is building relationships with the guys on my floor and by the end of the year we’re a family,” says Smith. “Part of being in a family is getting to know your family [and] it’s not like a “these are my kids” sort of thing, we’re all brothers striving towards the dreams and goals we have so I want to learn what they are and support them the best I can.”

Sophomore Rachel Burns is the first floor women’s RA this year and she said she applied because she wanted to help newcomers.

“I was really nervous last year and I wanted to spread the love of Jesus this way,” says Burns.

One thing Burns’ hopes to accomplish this year is for the students living on her hall to form a relationship.

“My goal for this year is for the girls to get to know each other and find common interests between all of us,” says Burns.  “I am excited to get to know the girls on my hall better [and] I have gotten to know some of them a little, but I am stoked to talk to all of them and create great discussions.”

Dickson Hall’s women’s second floor RA this year is sophomore Lauren Hager, who says she looked at being an RA as a way to share the gospel with those living on her floor.

“I applied to be an RA because I wanted the opportunity to be able to minister to the girls who could possibly be on my floor,” says Hager.  “I really want to help my girls have a great academic year and be there for whatever they need me for.”

Hager looks forward to being an RA and anticipates that the most difficult part will be trying to balance her job as an RA and her school work, but she has a tip for the students this year.

“My advice would be doing your assignments, be respectful and go to your classes,” says Hager. “I am really excited to get to know my girls, their personalities, and to be a part of their walk with Christ.”

Sophomore Jarrett Maxwell is the first floor men’s RA this year and says that his goals for his hall this year consists of becoming closer to the students and drawing them closer to God.

He is also looking forward to this opportunity to get to know new people and build relationships with the students, as well as the leadership skills he’s going to learn.

“[I’m looking forward to] the friendships, the leadership skills that I learn, the ability to be present in the lobby, and to get to know more people,” says Maxwell.

The third floor women’s RA for this year is junior Hannah Tilley, and she said she applied because she saw an opportunity to share the gospel with students who may have never heard it before.

“I applied because I was around some great RA’s the last two years I lived here and saw their impact in the lives of many girls,” says Tilley. “I wanted to serve and take this as an opportunity to minister and bring glory to the Lord.”

Tilley is looking forward to being an RA because of the opportunity to be a mentor for the students, but she knows there will be a difficult part of the job.

“I think my most difficult part of being an RA is accepting the fact that some people will not like me because of the position I’m in, but I am looking forward to being a mentor to these girls and being a positive influence,” says Tilley. “I want to make sure they know that I am always here for them.”

One of Tilley’s goals for her floor this year is for her students to develop a friendship with each other and she hopes that events like Hall Wars, MUD Week and SOAP groups would be great opportunities for them to bond.

“I’m really hoping my floor gets really close and will bond with each other [and] I think Hall wars, MUD Week and SOAP groups are great opportunities to become close to each other and God,” says Tilley.

Tilley offered some advice for the incoming new students.

“Get involved! It’s so nice to just go sit in the library and get to know people. Go to baseball and basketball games! Get involved in small groups like SOAP and dig into the word together,” says Tilley. “Also, take advantage of your easier classes, they will get much harder and you won’t have time to do as many fun things.”

Sophomore Tyler Sanders is the second floor men’s RA this year and says he likes the position because it helps pay for school. Sanders is looking forward to getting to know the students and helping them grow as people. He also has some advice for the incoming students.

“Never get too comfortable [and] always be subject to change,” says Sanders.